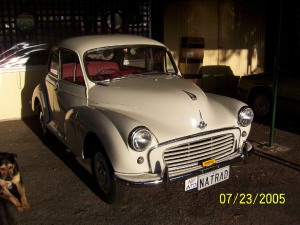 This vehicle was bought new in 1960 by Inna Watson of Claremont Western Australia.

She drove it for a number of years and then gave it to her niece Margaret Knight who used it for some years to run her children around to school etc. In 1988 it was surplus to requirements and offered for sale. Her brother in law Hugh Knight bought it for a $1000 and drove it 750kms home to Esperance on the southeast coast. The next morning he went to go down the street and the oil light stayed on and on inspection he found the sump empty. It then became obvious that the 70,000 miles/113,000km it had done had worn it out. In 1992 the vehicle was striped of all its paint and along with the engine was rebuilt.

In 2015 it has its original license plate UHC.226 and is still in Esperance.

For 2020 the Groups major project is to realign and seal our drive way. We are also restoring several private and Group vehicles / tractors.